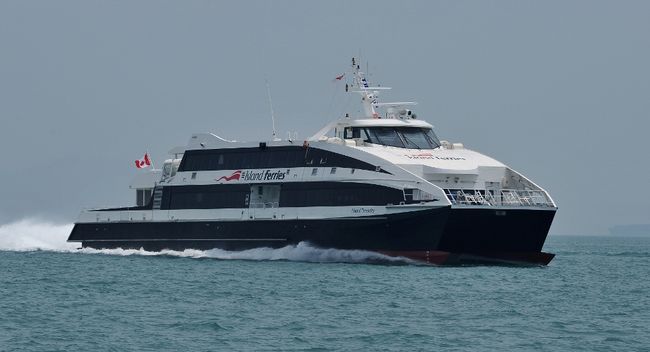 Media Release: August 23, 2017 Island Ferries and Nanaimo Reach Agreement on “Offer to Lease”
The Nanaimo Port Authority and Island Ferry Services Ltd. (Island Ferries) are pleased to announce that they have reached an agreement on an Offer to Lease certain facilities at 100 Port Drive that will support operation of a fast, passenger-only ferry service between downtown Nanaimo and downtown Vancouver.
On December 6, 2015, a Tripartite Committee of the Nanaimo Port Authority, Snuneymuxw First Nation and City of Nanaimo concluded an extensive Request for Expressions of Interest (RFEOI) and identified Island Ferries as the preliminary preferred proponent to operate the passenger-only service. Since that time, the Nanaimo Port Authority and Island Ferries have been working to confirm the operating and technical requirements, and negotiating the financial terms that will ultimately be embedded in a long-term lease. As required by the RFEOI, Island Ferries also engaged the Snuneymuxw First Nation to understand their perspectives and concerns, and to identify various opportunities.
Next steps in Nanaimo include an environmental review under the Canadian Environmental Protection Act (CEAA 2012), further discussions with the Snuneymuxw First Nation, continued engagement with the City of Nanaimo and the broader community, and completion of a long-term lease agreement to operate the passenger-only ferry service from the Port property.
“I am very pleased to reach this initial agreement with Island Ferries to site their terminal facility on the Port’s lands. It will provide Island Ferries with a first-class base for its operations from which to deliver a dependable, passenger-only ferry service between downtown Nanaimo and downtown Vancouver.”
Bernie A. Dumas, President and CEO, Nanaimo Port Authority
“This agreement is a key milestone in establishing a dependable, customer-focused fast passenger-only ferry service between downtown Nanaimo and downtown Vancouver. Not only does it provide much of the needed infrastructure in Nanaimo but it allows us to focus our efforts on the remaining elements needed to start service by the summer of 2018.”
Dr. C. Stewart Vinnels, President, Island Ferry Services Ltd.