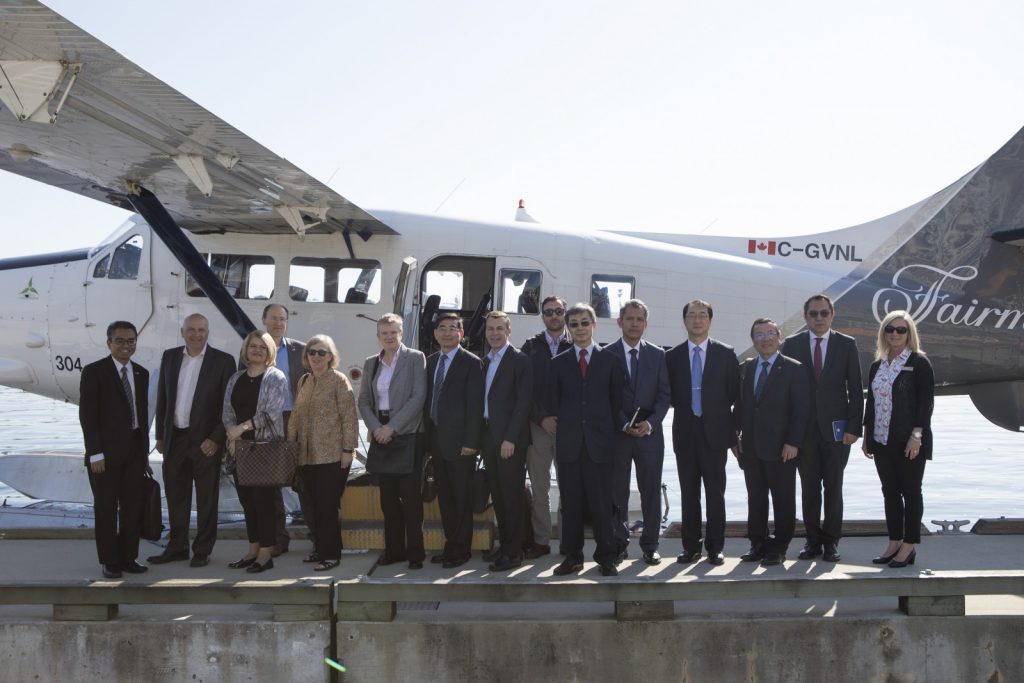 The day consisted of showcasing the both the University and Business opportunities that exist for students and companies from their respective countries in the Mid-Island.

For many this was their first visit to Nanaimo and they departed by seaplane at the end of their visit with a very favourable impression and we are now on their radar.

NANAIMO, BC: Students and employees got the opportunity to showcase Vancouver Island University (VIU) to more than a dozen representatives from countries around the world this week.

The University partnered with the Mid Island Business Initiative (MIBI) to tour 14 consuls general with offices in Vancouver around the University and mid-Island region on Tuesday, May 15. A consul general serves as a representative of their own country in another country, providing assistance with bureaucratic issues to both the citizens of the consul’s own country travelling or living abroad, and to the citizens of the country in which the consul resides who wish to travel to or trade with the consul’s country.

The purpose of the visit was to introduce the consuls general to what VIU and the mid-Island have to offer for investors and international students. Each consul general who came on Tuesday was matched up with a student from their home country where possible to tour VIU’s Nanaimo Campus before spending the afternoon at Milner Gardens and Woodland, a public garden in Qualicum Beach owned by the University.

“The goal was to raise awareness about the great work that VIU does for the central Island economy and the exciting opportunities for international students who study here,” says Dr. Graham Pike, Dean of International Education. “International students bring so much to our campus in terms of their cultures, languages and traditions.”

John Hankins, CEO of MIBI, says the goal of the visit was to raise awareness of the region to the Consulates to enable them to share the opportunities with companies and investors from their respective countries.

“On a global scale, Vancouver is well-known, but the mid-Island is not,” he says. “The consuls general represent their respective countries and having them come over and experience firsthand what we have to offer ensures we are on their radar.”

MIBI was created to introduce new organizations and industries to the advantages of establishing businesses in the mid-Island region. The organization acts as a catalyst, supporting businesses to harness the potential that exists in this area for both business and life opportunities. VIU is a member.

Dr. Ralph Nilson, VIU President and Vice-Chancellor, says the visit was an opportunity to showcase how important international students are to the region.

“Education is key to sustainable prosperity and an important part of this is welcoming international partnerships and international students to foster a global exchange of ideas. The mid-Island is evolving from a resource-based economy to a knowledge-based economy and enhancing opportunities for engagement across the globe is vital to success in this changing world. We also had the opportunity to discuss how VIU engages in learning with Indigenous communities on the West Coast of BC.”

Shreya Sachdeva, a Master of Business Administration student from India, showed Consul-General Abhilasha Joshi around the campus. She’s excited to tell her friends and family that she got to meet the consul general of India, who has invited her to an event she’s organizing for students in Vancouver.

“It was a great opportunity meeting the Consul General of India in Canada, as it’s a matter of pride for me to have represented the Indian student body of VIU in front of the Consul General,” she says. “This visit is great for our marketing and reputation. When students in India learn the consul general visited VIU, I think more students will want to come here.”

Philippe Sutter, Consul General of France in Vancouver, is excited to strengthen relationships with VIU to allow for more exchange opportunities between French students and researchers and West Coast institutions. France has launched a new program encouraging researchers from other countries to travel to France and vice-versa, and he also wants to increase opportunities for student exchanges.